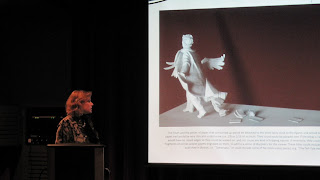 I propose to cast a life-size figure of Poe in bronze (approximately 5’ 8” tall). Just off the train, the figure would be walking south towards his place of birth, where his mother, father and maternal grandmother once lived. Poe, with a trunk full of ideas—and worldwide success—is finally coming home.
His expression is complex. He is determined and his stride is decisive. His face reflects a mixture of pain, anger and sadness, and from some angles, a subtle sense of hope.  As he walks towards Carver Street, he openly dismisses what is behind him with his left hand; the Frogpondians to the north. Boston is not claiming Poe, Poe is claiming Boston. To punctuate this, he leaves a literal paper trail behind him. He has not only left his mark on the world, he has left it on the city of his birth.  His ideas are jumping off the page and cascading out of his trunk; a heart lies just behind him, and an oversized Raven explodes to the south. The Raven, which has become symbolic of Poe’s brooding creative spirit, visually reflects Poe; his coat mimics the raven’s wing. They are one, heading up-wind towards their final resting place.
The patina for the figure and the paper trail (and heart) would be gray over black, with a matte finish. Streaks of black would show through on the Raven and on parts of the Poe figure (e.g. on the hair, inner coat, pants and shoes), but the overall effect would be ghost-like. The figure would look like an apparition. The lighting would be up-lighting, installed around the figure and flush with the brick.
From almost all angles, the sculpture has a rough triangular form, to further enhance its sense of place in the Poe triangle/square.
This model is carved from Basswood and is approximately 16” tall. The actual model is not gray, but a golden tan. The photos are black and white to give an approximate sense of what a gray patina would look like.
The figure would be attached directly to the brick, i.e. it would not have a stand. There are three points of contact, the two feet and the paper coming out of the north end of the trunk.
Although the Raven is designed to look rather foreboding, all of its sharp looking elements are people-friendly. The claws are turned inward and the feathers are left blunt and are curved back. Meanwhile, the beak is also blunt and is turned down.
The face on the model is approximately 2 inches high. When enlarged, certain subtleties can be addressed to enhance the likeness and expression. All of the fine detail would be resurfaced in clay.
The heart and the two pieces of paper that are turned up would be attached to the brick fairly close to the figure, and would be well-lit. The papers in the paper trail would be very thin and unobtrusive (1/8 to 1/16 of an inch). They could easily be plowed over if the plow is raised a half inch, or less.  They would have no raised edges so they could be walked on, and not cause any kind of tripping hazard. If necessary, they could be inset. Some of these pieces of paper could have fragments of stories and/or poems engraved on them (with a 19th century font, approximately 18 point), to add to a sense of discovery for the viewer. These fragments could include the work that Poe wrote and published in Boston, i.e. “Tamerlane,” or could include some of his more iconic pieces, e.g. “The Tell-Tale Heart,” or both. Stanza XVII of “Tamerlane” might be especially appropriate:
I reach’d my home—my home no more—For all was flown that made it so—I pass’d from out its mossy door,In vacant idleness of woe.There met me on its threshold stoneA mountain hunter, I had knownIn childhood but he knew me not.Something he spoke of the old cot:It had seen better days, he said;There rose a fountain once, and thereFull many a fair flow’r rais’d its head:But she who rear’d them was long dead,And in such follies had no part,What was left me now? despair—A kingdom for a broken—heart.
Ideally, the figure would be placed just before or just after the southern-most tree. It, and the paper trail, would also be placed slightly to the right of the square, as you look south, to blend in with the natural pattern of foot-traffic.  However, the placement of the figure and the paper trail is designed to be as flexible as possible.

New comments are not allowed.